The Achilles tendon runs from the calf muscles at the back of the lower leg and inserts at the back of the heel. A torn achilles can be a partial rupture or a total rupture. A total rupture is more common in men affecting them 10 times more than women. Injury typically occurs 30 to 40 minutes into a period of exercise rather than at the start of a session and nearly always happens from a sudden explosive movement or bending the foot upwards. Many patients are able to continue to function following an achilles rupture due to other muscles compensating although the injured leg will be significantly weaker. There are four key tests which can help diagnose a ruptured achilles tendon.

Causes
People who commonly fall victim to Achilles rupture or tear include recreational athletes, people of old age, individuals with previous Achilles tendon tears or ruptures, previous tendon injections or quinolone use, extreme changes in training intensity or activity level, and participation in a new activity. Most cases of Achilles tendon rupture are traumatic sports injuries. The average age of patients is 29-40 years with a male-to-female ratio of nearly 20:1. Fluoroquinolone antibiotics, such as ciprofloxacin, and glucocorticoids have been linked with an increased risk of Achilles tendon rupture. Direct steroid injections into the tendon have also been linked to rupture. Quinolone has been associated with Achilles tendinitis and Achilles tendon ruptures for some time. Quinolones are antibacterial agents that act at the level of DNA by inhibiting DNA Gyrase. DNA Gyrase is an enzyme used to unwind double stranded DNA which is essential to DNA Replication. Quinolone is specialized in the fact that it can attack bacterial DNA and prevent them from replicating by this process, and are frequently prescribed to the elderly. Approximately 2% to 6% of all elderly people over the age of 60 who have had Achilles ruptures can be attributed to the use of quinolones.

Diagnosis
Your caregiver will ask what you were doing at the time of your injury. You may need any of the following. A calf-squeeze test is used to check for movement. You will lie on your stomach on a table or bed with your feet hanging over the edge. Your caregiver will squeeze the lower part of each calf. If your foot or ankle do not move, the tendon is torn. An x-ray will show swelling or any broken bones. An ultrasound uses sound waves to show pictures of your tendon on a monitor. An ultrasound may show a tear in the tendon. An MRI takes pictures of your tendon to show damage. You may be given dye to help the tendon show up better. Tell the caregiver if you have ever had an allergic reaction to contrast dye. Do not enter the MRI room with anything metal. Metal can cause serious injury. Tell the caregiver if you have any metal in or on your body.

Non Surgical Treatment
To give the best prospects for recovery it is important to treat an Achilles' tendon rupture as soon as possible. If a complete rupture is treated early the gap between the two ends of the tendon will be minimised. This can avoid the need for an operation or tendon graft. There are two forms of treatment available for an Achilles' tendon rupture; conservative treatment and surgery. Conservative treatment will involve the affected leg being placed in a cast and series of braces with the foot pointing down to allow the two ends of the tendon to knit together naturally. 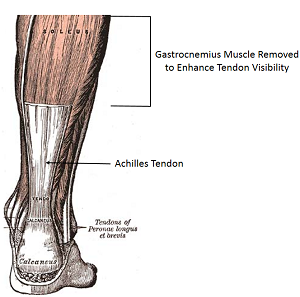 Surgical Treatment
The surgical repair of an acute or chronic rupture of the Achilles tendon typically occurs in an outpatient setting. This means the patient has surgery and goes home the same day. Numbing medicine is often placed into the leg around the nerves to help decrease pain after surgery. This is called a nerve block. Patients are then put to sleep and placed in a position that allows the surgeon access to the ruptured tendon. Repair of an acute rupture often takes somewhere between 30 minutes and one hour. Repair of a chronic rupture can take longer depending on the steps needed to fix the tendon.

« What Are The Causes Of Severs Disease? True Leg Length Discrepancy Tests »
Profile

Login to quote this blog

You cannot quote because this article is private.